A Few Words About Us 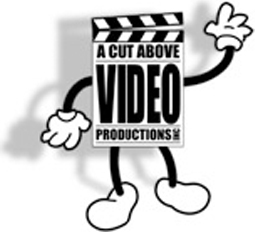 A Cut Above Video was incorporated on October 6, 1988 in the State of Florida. Back then and continuing today, the company has been run with a focus on video production and advertising to fulfill the needs of business and government.

1992 A broadcast camera and linear edit system was added, and the production facility was moved from Cocoa and Cape Canaveral to Melbourne Florida.

1994 Ted Leonsis of AOL was videotaped by Bill Williams and that video was encoded for one of the first digital video transmissions for an overseas AOL presentation in part to demonstrate this new digital technology.

1999 'Thrust into Space, How the Space Program Changed Brevard County' was produced and added to The Library of Congress' collection as part of The Local Legacies Project for the Library's 200th anniversary.

2000 The production resources of a local television station were acquired. Karl Miller, Production Manager for local chanel 43 began working for A Cut Above Video.

2002 The transition to video delivery to the web, CDs, and DVDs is in full swing.

2003 A Cut Above moved to a new 2,000 square foot facility and added a second non-linear edit system.

2005 Keri Goff joined A Cut Above handling most office tasks, editing and production.

2011 The Digital Revolution continues with the evolutionary change to delivering most video content on the internet.

2013 Rachel Hoch joined A Cut Above as an editor and production planner.

2015 Gabe Russo joined A Cut Above as an editor and production assistant.

2015 Keri Goff transitioned into Vice President of A Cut Above Video Productions.

2017 Keri Goff became a partner and share holder in the corporation.

2018 Connor McCloud joined the team as a Video Editor.

The video recording studio is an insert stage with a head to toe Chroma key green-screen and fully equipped lighting grid. It is acoustically configured for audio recording with access to a variety of microphones including a boomed shotgun microphone.

TV studio production configurations include broadcast HD cameras or large format cinema style cameras, which are also available for field production. An in-house 17” TelePrompTer may also be configured for studio or field use. For those with poor eyesight a custom built 32” studio TelePrompTer is available.

A separate audio booth is interfaced with the video editing system and has sufficient space for interviews with multiple people. A phone patch is available for remote monitoring and direction as well as phone recording.

Recording options include the camera's on board recording media or outboard digital recorder. Lens options include wide-angle or standard TV broadcast lenses and a set of cinema primes for large format recording.

Several years ago when the EDC sought to formally promote Brevard County’s world class space industry presence, we partnered with A Cut Above Video to create the rousing documentary, “Thrust into Space.” This first rate production has since circulated the world as a first line of promotion at tradeshows and conferences."

A Cut Above Video has been an integral part of the Harris Multimedia Services. Their responsiveness, expertise, and reliability have proven to be a key factor in supporting our requirements. They have become a trusted partner providing video production and multimedia solutions."

I’ve worked with A Cut Above for over 10 years on well over 100 projects. During that time my business has increased tenfold due, in part, to the quality of work and on-time video and audio production we get from A Cut Above."

I’ve been working with A Cut Above Video since they started and they have been the technical genius behind every large video project that we have completed. Whether in the field, in the studio or in post-production, A Cut Above Video takes care of the details so a producer can think about his own job and not about the details of equipment or logistics. …Bottom line – if you want a video expert who you can rely on to do thier job so you can do yours – call A Cut Above Video."